David recently posted about ‘kipple’ and revealed my addiction to picking things up off the ground. Yes, it’s a habit and not a very appealing one but I can’t pass by a bit of rusty metal or anything shiny. I get a bit embarrassed doing it around other people but it doesn’t stop me — instead I’ve developed a (hopefully) discreet swoop and bend, slipping the find into a dedicated outside pocket of my bag where things accumulate surprisingly quickly. Here’s what I found when I looked just now:

My favourite recent find was the little rabbit at the top of this post, which I found trodden into the mud while on holiday in Kent. That didn’t stop me prising it out and putting it in my collecting pocket. Now that it’s cleaned up, it’s a great souvenir of that particular day of the holiday — better, somehow, than something I could have bought. 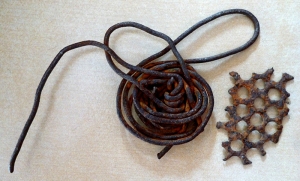 My ultimate things to find are dropped photos, of which I find more than you would think. Also heart-shaped things (again, you wouldn’t believe how many I’ve already found) and bits of broken pottery with patterns on. I think I’m probably going to end up turning into one of those true eccentrics who see out their days decorating their homes and gardens with dolls and plates, like Raymond Picassiette, or, closer to home, Stephen Wright. If only that dream could come true!