Highlight of the BBC’s coverage of this year’s Glastonbury Festival for me was the mesmerising set by plucky Geordie pensioner, Bryan Ferry, and his superb backing band. The set included one of the best performances I’ve seen of my favourite Roxy Music song, In Every Dreamhome A Heartache. There’s a dissipated patina to Ferry’s love-lorn lothario persona that is now more haunting than ever as he croons his obsession for a blow-up sex-doll, blowing his mind in a desolate architect’s fantasy home.

The song has (at least) two Tumblrs – here – and here –  and the connection has been made often in the past between the song and Ferry’s onetime tutor, Richard Hamilton – particularly Hamilton’s signature piece, Just What Is It That Makes Today’s Homes So Different, So Appealing? – and I’m sure I’m not the only person who has Roxy Music to thank for my love of Hamilton’s work over the past 40 years.

However, when I hear Ferry sighing “You float in my new pool, deluxe and delightful” – it’s always this image that occurs to me:

Hamilton was obsessed with Marilyn Monroe, but I’m sure Ferry must have seen this – and similar – shots of Hollywood’s less celebrated blonde icon, Jayne Mansfield, from 1957 when she was promoting hot water bottles made in her own buxom image. 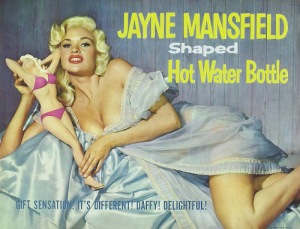 Another great rock genius who identified with the fantasy and the heartache behind Jayne Mansfield’s career was XTC’s Andy Partridge who used the same photos for the cover of his 1980 solo album (dub covers of early XTC songs), Take Away … 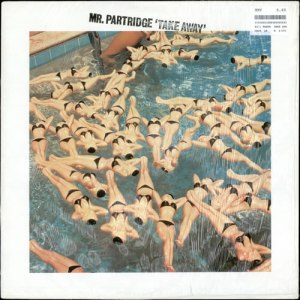 … again, it’s thanks to Andy’s record that I discovered that such an unlikely thing as a Jayne Mansfield-shaped hot water bottle existed. There’s some information about them here.  I’d love to have one. I think if I ever unearthed one at a car boot sale or flea market, it probably would blow my mind – like Bryan’s!