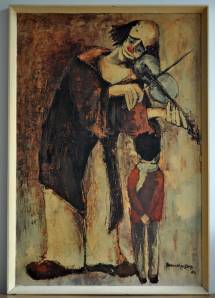 Today I’ve been uploading more vintage treasures to our Etsy store – including this 1960s framed print found recently on a visit to Stockton-on-Tees.

The original painting was done in 1964 by the Spanish artist Rosy Fernández-Díaz (b.1935 – is she still alive?), whose work is not especially celebrated or popular – with the exception of her sentimental 1960s paintings of clowns. This one – titled Clown Met Kind – (‘Clown with child’, in German, slightly oddly) is one of the best known and it’s a very collectable piece of mid-century kitsch.

What’s really fascinating about this piece is that on the back it has the label of the original framer –  J Goldstein & Son of Middlesbrough – plus the original 1960s price – £2.18s 6d. 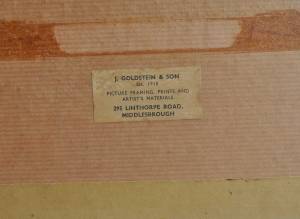 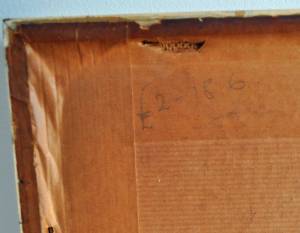 There is a tendency to think that people who collect these kinds of vintage mid-century prints which were ,as Wayne Hemingway said, hung just above the mantelpieces of thousand or ordinary homes – pictures much loved by their owners, but deemed barely worthy of a sneer by contemporary taste-makers – were “cheap trash” in the 1950s and 1960s and are now greatly over-valued by dealers flogging them to loaded hipsters.

However, the Teesside art lover who handed over £2.18s 6d for this framed print in the 1960s was spending roughly the equivalent of £50 today – so it wasn’t exactly a Woolworths-style purchase back then – and today we’re not, relatively speaking, over-pricing it at £45 in our Etsy shop (hello loaded hipsters!).

8 thoughts on “Art For Art’s Sake”